In computer science, there is a long-standing notion that an incorrect or poor-quality input will always produce a faulty output. This is captured by the familiar expression “garbage in, garbage out”. The concept is especially true when considering the role of test data used in software quality assurance testing.

Test data quality is central to GenRocket’s approach to real-time synthetic test data generation. We believe the quality of the testing process is only as good as the quality of the test data being used by those tests. When generating test data for your test automation framework, it’s just as important to generate data with a very high standard of quality as it is to provision it rapidly. 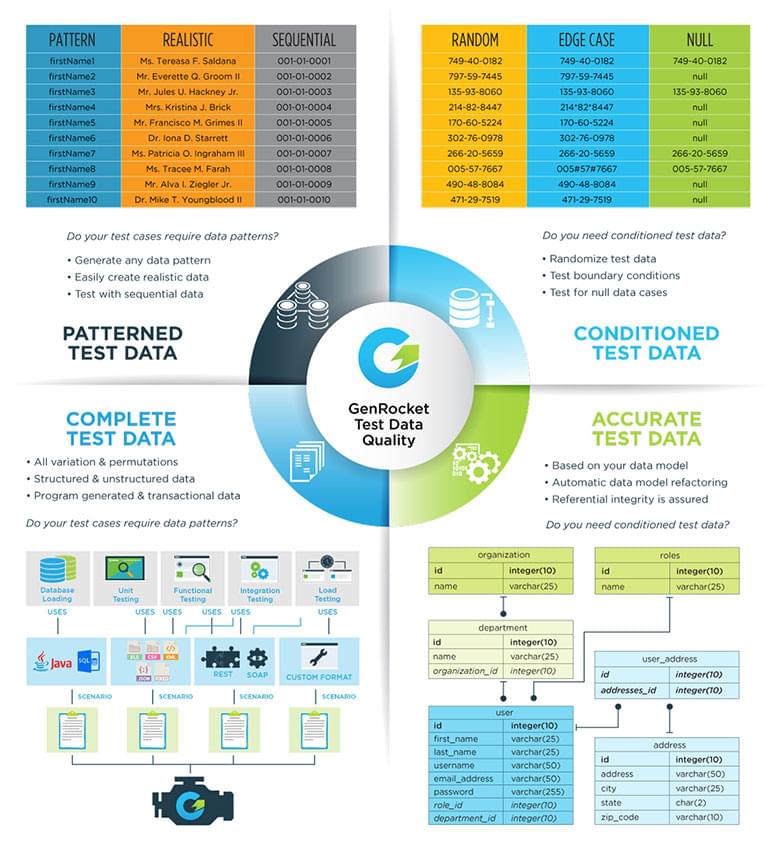 The GenRocket platform provides hundreds of test data generators that can be combined to create test datasets with any pattern of data you can imagine. Here are some typical examples:

Simply select a combination of test data generators and invoke them from a GenRocket Scenario.

GenRocket allows testers to define their own test data requirements and generate conditioned test data in real-time and on-demand.

The best way to maximize code coverage is to maximize the completeness of the test data. With GenRocket, testers can generate more variations of test data than can possibly be found in a production data subset. Permutation testing, for example, is useful for finding false positives in applications with an extensive use of calculations that produce statistical results.

Another example is testing machine learning algorithms that must be trained and validated using a large test dataset that represents real-world information with a variety of values in either structured or unstructured formats.

Financial service applications that handle high-volume of transactions must be rigorously tested with a large-scale transaction history with dates in the future or in the past, and with the ability to blend synthetic data with program data that accurately reflects transaction outcomes.

GenRocket’s real-time synthetic test data can produce the most comprehensive test data imaginable for the most demanding application testing requirements.

GenRocket also maintains referential integrity for all parent-child relationships among data tables at all times throughout the TDG process. The more complex the application and its database structure, the more value QA professionals will realize from GenRocket’s ability to ensure referential integrity.